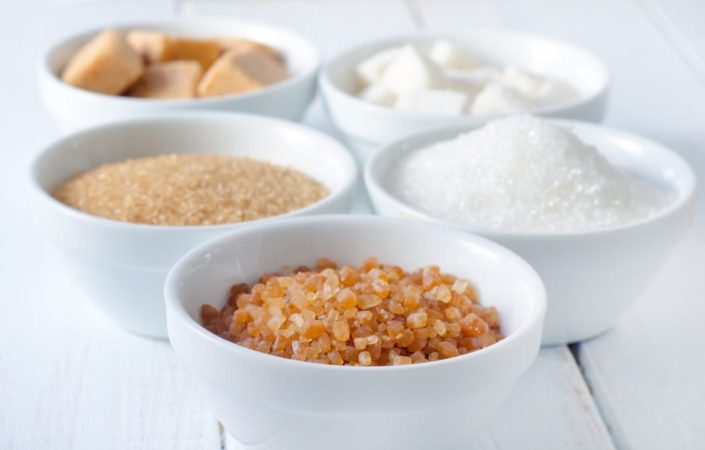 Sugar substitutes are chemical or plant-based substances used to sweeten or enhance the flavor of foods and drinks. You may have heard them called “artificial sweeteners” or “non-caloric sweeteners.” They can be used as a tabletop sweetener (for example, to sweeten a glass of iced tea) and/or as an ingredient in processed foods and drinks.

Sugar substitutes are regulated as food additives by the U.S. Food and Drug Administration (FDA). This means that the FDA reviews scientific evidence to be sure that a sugar substitute is safe before it can be used in foods and drinks.

Sugar substitutes provide sweetness and enhance the flavor of food without adding the calories of sugar. Unlike sugar, they don’t contribute to tooth decay. Most of them don’t raise blood sugar levels. This may be helpful if you have diabetes and have to be careful about how much sugar you consume.

Sugar substitutes may also be helpful if you’re trying to control the amount of calories you consume. They are found in most of the “light,” “reduced calorie,” and “sugar-free” foods and drinks available today. Although sugar substitutes have fewer calories than sugar, it’s best to limit them and focus on healthy food choices. Fruits, vegetables, lean meats, and whole grains are the best sources of nutrition for your body.

How can I tell if a food or drink contains a sugar substitute?

Sugar substitutes are used in many processed foods and drinks, including baked goods, soft drinks, powdered drink mixes, candy, puddings, canned foods, jellies, and dairy products. Check the ingredient list on the nutrition facts label for the names of the sugar substitutes. This list gives ingredients in descending order by weight. Unless you add a sugar substitute yourself, it is often hard to know exactly how much of it a food or drink contains.

What sugar substitutes/artificial sweeteners are approved by the FDA?

The following sugar substitutes are FDA approved as food additives in the United States:

According to the FDA, some sugar substitutes are “generally recognized as safe” (GRAS). This means they don’t require FDA approval because qualified experts agree the scientific evidence shows these products are safe for use in foods and drinks. Sugar substitutes in this category include highly purified stevia extracts called “steviol glycosides” (two brand names: Pure Via and Truvia) and monk fruit extracts (two brand names: Monk Fruit in the Raw and PureLo).

Sugar alcohols are another class of sweeteners that can be used as sugar substitutes. Examples include mannitol, sorbitol, and xylitol. The FDA has determined that sugar alcohols are generally recognized as safe for use in foods and drinks.

Aspartame is a common low-calorie sugar substitute. It’s a combination of 2 amino acids: aspartic acid and phenylalanine. It’s about 200 times sweeter than sugar. It can be found in thousands of processed foods and drinks. Products that contain aspartame include yogurt, frozen desserts, pudding, dry dessert mixes, chewing gum, and soft drinks.

It’s used as a tabletop sweetener. It also can be found in some medicines (for example, cough drops) and vitamins. Aspartame shouldn’t be used as a substitute for sugar when you’re baking. It loses its sweet taste when it’s heated.

Aspartame is one of the most researched sugar substitutes available in the United States. More than 100 studies have examined its safety. It has been approved by the FDA as a food additive since 1981.

People who have a rare condition called phenylketonuria (PKU) shouldn’t consume aspartame. That’s because their bodies are unable to metabolize (process) phenylalanine, which is one of the amino acids in aspartame.

According to the National Cancer Institute, there is no evidence that aspartame and other sugar substitutes approved for use in the United States cause cancer or other serious health problems. Medical research studies have shown these sweeteners are safe for most people when used in moderation.

Acesulfame K is a no-calorie sugar substitute that is 200 times sweeter than sugar. It’s also known as acesulfame potassium or Ace-K. It’s often used in combination with other sweeteners.

Acesulfame K can be found in a variety of processed foods and drinks, including baked goods, candy, frozen desserts, and soft drinks. It also can be used as a tabletop sweetener. It’s used in some medicines and oral hygiene products (for example, toothpaste and mouthwash).

It can be used in cooking and baking because it doesn’t lose its sweet taste at high temperatures. For best results, follow the package instructions when using it this way.

More than 90 studies have examined the safety of acesulfame K. It has been approved by the FDA as a food additive since 1988. According to the National Cancer Institute, there is no evidence that acesulfame K and other sugar substitutes approved for use in the United States cause cancer or other serious health problems.

Saccharin is a low-calorie sugar substitute that was first discovered in 1879. It is 200 to 700 times sweeter than sugar, depending on how it’s used. Some people may notice an aftertaste when they consume saccharin. This is often eliminated in processed foods by combining saccharin with another sugar substitute.

Saccharin is found in many processed foods and drinks, including chewing gum, canned fruit, baked goods, and soft drinks. It’s also used as a tabletop sweetener. It’s used in some medicines and vitamins.

Saccharin can be used as a substitute for sugar when you’re baking. For best results, follow the package instructions for using it in your recipes.

Saccharin is approved by the FDA as a food additive. You might remember that saccharin used to carry a warning label that said it was known to cause cancer in laboratory animals. However, there has been extensive research on the safety of this sugar substitute. In 2000, the U.S. government removed the requirement for a warning label on foods and drinks made with saccharin.

Stevia is a plant-based sugar substitute that has no calories. The term “stevia” refers to Stevia rebaudiana, which is a South American plant. Only certain parts of the plant are sweet. Highly purified extracts from the leaves of the plant are called “steviol glycosides.” They are 200 to 400 times sweeter than sugar.

The term “stevia” can refer to the whole Stevia rebaudiana plant. However, in this article, “stevia” refers to the sugar substitute made from steviol glycosides. That is how the term is commonly used.

Stevia is found in many processed foods and drinks, such as desserts, chewing gum, baked goods, candy, and yogurt. It is also used as a tabletop sweetener. Stevia can be used as a substitute for sugar when you’re baking. For best results, follow the package instructions for using it in your recipes.

According to the FDA, steviol glycosides are “generally recognized as safe” (GRAS). This means that qualified experts agree the available scientific evidence about this sugar substitute shows it’s safe for use in foods and drinks.

Sucralose is a no-calorie sugar substitute. It is about 600 times sweeter than sugar.

It is used in thousands of processed foods and drinks. Some examples include soft drinks, juices, sauces, syrups, candy, desserts, baked goods, and canned fruits. It is used in

medicines, nutritional supplements, and vitamins. It is also used as a tabletop sweetener.

Sucralose can be used in baking because it doesn’t lose its sweet taste at high temperatures. For best results, follow the package instructions for using it in your recipes.

More than 110 studies have examined the safety of sucralose. It has been approved by the FDA as a food additive since 1998.

According to the National Cancer Institute, there is no evidence that sucralose and other sugar substitutes approved for use in the United States cause cancer or other serious health problems.

Despite their name, sugar alcohols aren’t sugar, and they aren’t alcohol. They are carbohydrates that occur naturally in certain fruits and can also be manufactured. They get their name because they have a chemical structure similar to sugar and to alcohol. Sugar alcohols are also called “polyols.”

Sugar alcohols are found in many processed foods, including hard candies, ice cream, puddings, baked goods, and chocolate. They can also be found in chewing gum, toothpaste, and mouthwash. They may be used in combination with another sugar substitute.

The most common sugar alcohols found in foods include:

By comparison, there are 4 calories per gram of sugar.

How do I find sugar alcohols on a nutrition facts label?

Your body doesn’t completely absorb sugar alcohols, so they don’t affect your blood sugar levels as much as sugar and other carbohydrates do.

According to the FDA, sugar alcohols are “generally recognized as safe” (GRAS). This means that qualified experts agree the available scientific evidence shows they are safe for use in foods and drinks. However, you should consume them in moderation. Because sugar alcohols aren’t completely absorbed by your body, eating large amounts can lead to bloating and diarrhea.

While they’re considered safe, sugar substitutes can cause diarrhea. This can happen when you consume large amounts of a product such as sugar-free candy.

Health experts have debated for years the use of sugar substitutes. Some would say that sugar substitutes are still controversial. However, the scientific community and FDA agree that they’re safe to use, especially in moderation. If you have concerns, you should talk to your doctor about how or when to include sugar substitutes as part of a healthy diet.

Diabetic Ketoacidosis is a serious condition related to diabetes and fatal if not properly treated.

Added Sugar: What You Need To Know
Read Article >>
Sugar and Sugar Substitutes

Added Sugar: What You Need To Know

Sugar is a simple carbohydrate that provides calories for your body to use as energy. There are two main…