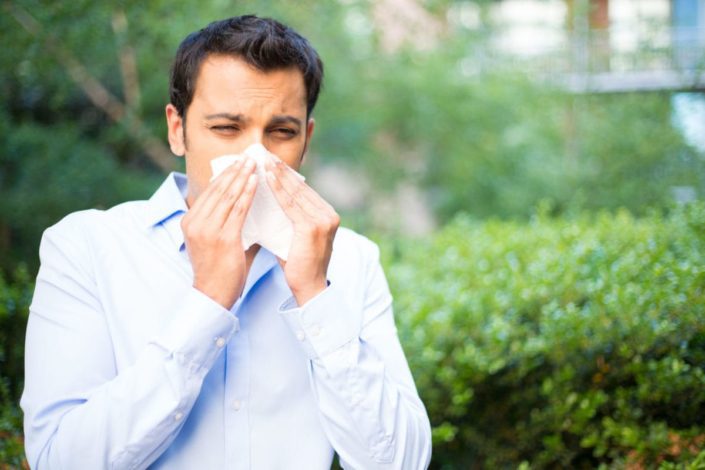 What is allergic rhinitis?

There are 2 forms of allergic rhinitis:

Your symptoms can vary, depending on the severity of your allergies. Symptoms can include:

If you have allergies, your body releases chemicals when you are exposed to an allergen. One such chemical is called histamine. Histamine is your body’s defense against the allergen. The release of histamine causes your symptoms.

Hay fever is an allergic reaction to pollen. Pollen comes from flowering trees, grass, and weeds. If you are allergic to pollen, you will notice your symptoms are worse on hot, dry days when wind carries the pollen. On rainy days, pollen often is washed to the ground, which means you are less likely to breathe it. Your allergies can vary depending on the time of year:

Allergens that can cause perennial allergic rhinitis include:

How is allergic rhinitis diagnosed?

If your symptoms interfere with your daily life, see your family doctor. Your doctor will ask you questions about your symptoms and medical history and perform a physical exam. Keeping a record of your symptoms over a period of time can help your doctor determine what triggers your allergies.

Your doctor may want to do an allergy skin test to determine what you are allergic to. Tiny amounts of allergens are applied to your skin. You will feel tiny pricks that are usually not painful. Your doctor will observe and record the way your skin reacts to each allergen.

Your doctor may also decide to do a blood test, such as the radioallergosorbent test (RAST). This test identifies antibodies in your blood that determine what you’re allergic to. Once your allergens are identified, you and your doctor can decide the best treatment.

Can allergic rhinitis be prevented or avoided?

Allergic rhinitis cannot be prevented. You can help your symptoms by avoiding the things that cause your symptoms.

You can also avoid things that can make your symptoms worse, such as:

Several medicines can be used to treat allergies. Nasal steroids are often the most effective treatment. Your doctor will help you determine what medicine is best for you depending on your symptoms, age, and overall health. If you are pregnant, your doctor will advise what medications are safe for you to take. Some allergy symptoms during pregnancy are a naturally occurring part of being pregnant and not allergic rhinitis.

These medicines help prevent symptoms if you use them regularly, before you’re exposed to allergens:

There are many medicines and treatments that can help you manage your symptoms. Talk to your doctor as soon as you feel that your symptoms are getting worse or are not easy to control. Your doctor can help you come up with the right plan to control allergies so they don’t affect your ability to live your normal life.

Over the counter antihistamines can be used to treat allergy symptoms. It’s important to know what they do and…

Allergy Shots: Could They Help Your Allergies?

Allergy shots can relieve symptoms for people with chronic allergies including mold and pollen from grasses, ragweed and trees.